Ratings :
Click the stars to rate Average Rating : Total Hits :
357,884 Rated by :
401 user(s)
Retail Price: RM 640
AP Price: N/A
ZTE Blade specs reveal an Android 2.1 Eclair powered smartphone. ZTE Blade price and release date information is not official yet, but we have some speculation on each. Additionally, it is also worth mentioning that the ZTE Blade also has a sister smartphone codenamed Orange San Francisco. One of the highlights for this cell phone is the AMOLED touch-screen display. Below you can review more of the ZTE Blade specifications.
Review On : ZTE Blade

12 July 2011  The ZTE Blade is an Android phone manufactured by Chinas ZTE Corporation. It was announced during October of 2010. The ZTE Blades specification, including the type of display, Internal RAM and camera varies according to region. For example, the ZTE Blade sold in Germany comes with a 5.0-megapixel camera instead of the standard 3.2-megapixel sold in other regions.

The ZTE Blade is a small black rectangular phone with a 3.5-inch LCD capacitive touchscreen dominating the top of the phone. The screen is packed with 480 x 800 resolution pixels and it is one of the brilliant screens we have ever seen, as it is able to display clear and vivid colors accurately. It also has a great viewing angle  it retains its color saturation and clarity even when tilting the screen away from the center, which most LCD screens failed in this area. 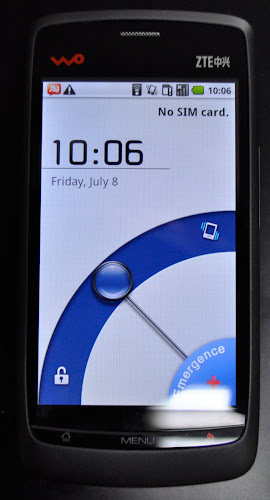 Measuring at 116 x 56.5 x 11.8mm, the ZTE Blade fits nicely in my palm. The phone is light too, as it weighs approximately 110g. The power button and the headphone jack is conveniently located on the top of the phone. There is a volume rocker which is placed on the left side of the phone and a micro-USB on the right side. ZTE decides to leave the bottom of the phone completely empty except for a pinhole for the microphone. 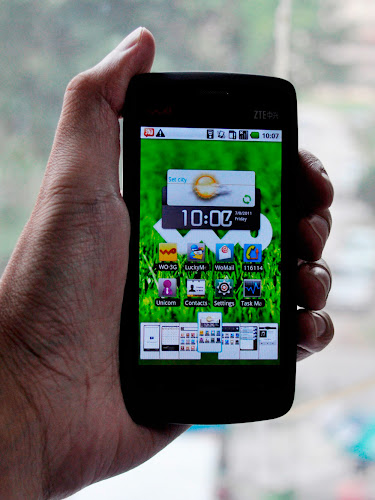 Unlike HTC and LG phones which use capacitive buttons, the ZTE Blade has three physical buttons located on the bottom of the screen, the Home, Menu and Back button. The Back button has a LED notification beneath, which emits amber light when the phone is charging and green light when it is fully charged.

Under the hood, the ZTE Blade is powered by a 600 MHz ARM 11 processor with an Adreno 200 GPU. Our review unit comes with 150MB internal storage and 256MB of RAM. It has an expandable microSD card slot that supports up to 32GB.

Software and Applications
In addition, the ZTE Blade is running on Android version 2.2 or Froyo with minimal customization on the user interface. The operating system runs smoothly despite on a limited amount of RAM without showing any signs of lag. However, the ZTE Blade is pre-installed with a bunch of bloatware, as we found many Chinese apps and links. Most probably our review unit we obtained is intended for the China market. 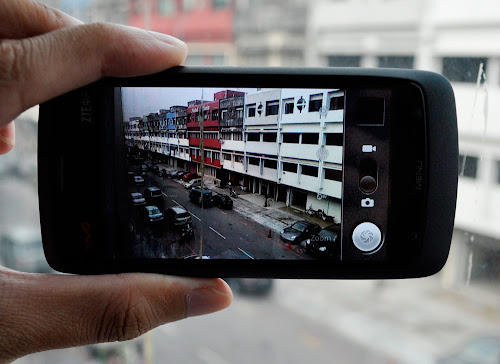 For photo and video, our version of the ZTE Blade is equipped with a 3.2-megapixel rear camera. It uses the default Android camera interface without any customization. The camera is able to handle close shots quite well, otherwise most photos would appear to lack of sharpness and focus. You are able to switch to camcorder mode easily by sliding up the toggle on the left. There are four types of video quality for you to choose, including VGA, CIF, QVGA and QCIF. You can record video up to 640 x 480 resolution at 3gp format. 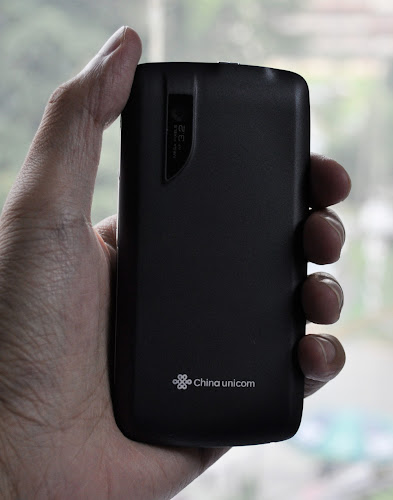 Furthermore, the ZTE Blade has a good loudspeaker. It delivers solid sound outputs via the speaker grill located on the bottom left of the device. We have tried cranking up the volume while playing music, it can go really loud without noticeable audio distortion. Plus, it is strategically placed to prevent the sound being muffled when placed on top of a soft surface like a cushion.

This device has the capability of supporting HSDPA 7.2Mbps, WiFi 802.11 b/g and Bluetooth 2.1. It also has a built-in GPS chip on board for navigation purpose. There is a micro-USB port for data transfer by simply connecting the phone to a computer, which is common feature found in most Android phones.

We really like the high resolution and great display come with the ZTE Blade. However, the 3.5-inch display sounds like very little real estate. We did not like that the Android Marketplace has been replaced with HiMarket in this device. Overall, it is a decent Android phone packed with all the necessary functions. Conclusion: A portable phone with a great display. Otherwise, it suffices for basic usage.